Kogi Government on Thursday said all public and private schools in the state would resume academic activities on Jan. 18, and urged all relevant stakeholders to strictly comply.

The state’s Commissioner for Education, Science and Technology, Mr Wemi Jones, made the announcement during a news briefing in Lokoja. 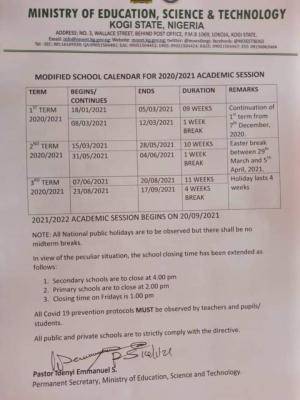 Jones reiterated that all schools should resume on Jan. 18 to continue the first term of the 2020/2021 academic session.

”It has become imperative for me to address the press to clear the air, so as to prevent confusion on account of school resumption in Kogi.

”I will like to state unequivocally that resumption date for all schools in Kogi remains January 18, 2021.

”This applies to both public and private primary and secondary schools, and tertiary institutions of learning in the state,”he said.

The commissioner said that his ministry had revised the school calendar to accommodate and make up for the two-week break extension due to the lockdown that was prompted by the second wave of the COVID-19 pandemic.

He said the schools were initially scheduled to resume on Jan. 4 for continuation of the first term, but that it was extended by two weeks due to the hardships caused by the pandemic and the lockdown.

He said that Gov. Yahaya Bello had directed the ministry to comply with the two-week break extension in the state as advised by the Presidential Task Force (PTF) on COVID-19.

”’The governor, thereafter, clearly stated that the state would not jeopardise the education of our children by extending school resumption beyond January 18, 2021.

”So, schools must resume in Kogi across all levels: primary, secondary and tertiary for both private and public schools, on January 18,” Jones said.

He urged all Boards and Agencies under the ministry, and all relevant stakeholders to take note of the development and act accordingly.

He said that the ministry would monitor school resumption as usual, saying all heads of schools should strictly comply with the directive.

The commissioner further warned that any contravention of the directive would attract sanctions.

He re-emphasised the need for teachers, students and parents to take note, observe and strictly adhere to all the COVID-19 protocols as stated by the PTF.

According to him, the continuation of the first term of the 2020/2021 academic session would begin on Jan. 18 and end on March 5.

”If we are able to achieve these, our losses in terms of time wasted during the lockdown would be very negligible.

”This remodified calendar has taken care of all national public holidays, as we have taken them into consideration. So, every institution is advised to adhere strictly to it,” he said.

He stressed that the schools had had enough break, and hence, there would be no mid-term holidays during all the sessions. (NAN)